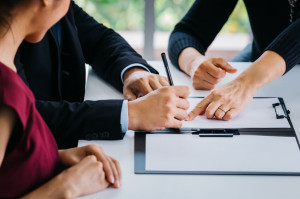 Divorce is a mentally and emotionally exhausting process to get through. On top of the emotional distress of leaving your partner and continuing life on your own, you will have to walk through complex court processes to finalize the separation. This can be made even more difficult if you have many assets or are working through a separation with any children involved. Because of this, you may be seeking some alternative to divorce that still gets you the distance that you need from your partner while offering a less severe (or less final) solution to your marriage. If this sounds like you, the team at Ascent Law wants to help. Below, we’ve listed alternatives for divorce in Utah and explained how your lawyer can help you to navigate the divorce process.

Divorce is a permanent, court-supported, and legally-binding separation between you and a married partner. Any remaining elements of your marriage will be legally dissolved.

Are there alternatives for divorce in Utah?

Because of the permanent nature of a divorce, many are seeking possible alternatives for divorce in Utah. If you need to separate but do not want the finality and permanency that a divorce can bring, we recommend that you seek legal support as soon as possible to explore what option is right for you. Alternatives to divorce include:

A non-divorce doesn’t require a court process, making it a popular alternative to divorce for families who may find themselves in financial hardship or who don’t want to include their children in a lengthy court process. A non-divorce works similarly to how it may sound and includes informal methods of separation. Examples of these include:

While this is a viable option for avoiding a true divorce and can give you the flexibility that you need to possibly reconcile later, it isn’t necessarily recommended as a strong long-term course of action. This is because it is extremely easy for communication issues to arise and further disrupt your relationship’s dynamic. There also is no legal support behind this option, so if your situation became complicated, you would have a longer process to involve the court and pursue any secondary needs: such as a protective order or legal custody arrangement. If you’re considering this option, it’s important to have the communication pathways in place to ensure that all parties can mutually benefit from the arrangement wherever possible.

Annulment in Utah is not a single court filing process. In order to use annulment as the legal justification behind your separation, you must be a resident of the district or county that you live in for 90 days. After this time, you would be able to file a Complaint of Annulment form with your local district court system. While it seems easier than a formalized divorce, it is not a decision to be taken lightly. The idea behind an annulment is that your marriage never “technically” existed or somehow existed in a nonviable, fraudulent, or otherwise mistaken or incorrect way. You’re undermining the validity of your marriage’s existence in the first place when you move to seek an annulment in Utah.

Annulment has state-specific requirements that are required to prove, most built around the lack of validity behind your marriage. For example, you may need to prove that there was a fraudulent force from the very start of your relationship or marriage petition or that you were somehow incapacitated at the time of your marriage occurring. This can be difficult to prove, so having a seasoned attorney can help to streamline your process. Your lawyer can come alongside you and review any evidence you have, building the strongest court case possible to protect your interests.

Legal separation is a viable alternative to divorce in Utah and can provide you with a more streamlined way to get a divorce decree issued if you decide that is the best step for you to take. In a legal separation, both you and your spouse will have no legal or financial obligation to each other. To file for legal separation in Utah, you have to determine if your case is a no-fault or a faulted separation (which would be the case of domestic violence, abuse, or similar cases). After that, your lawyer can assist you in compiling your documentation and building a case for the court.

The benefit of choosing legal separation over divorce is the lack of permanency that it has compared to other options. You are able to live entirely separately, work on yourselves, and rejoin your union at a later point if you want. With a divorce, it can be more time-consuming to do this, as it is permanent.

Ascent Law is here to help in the Utah divorce process

If you are considering a divorce, The team at Ascent Law is here to help. For more information and to book your free intro call today, please visit our website. We look forward to serving you!