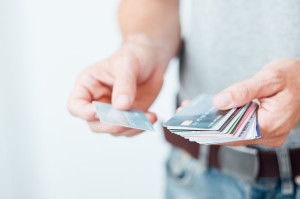 If you’re looking to make a larger investment, such as a car or a house, you’re probably looking for ways to raise your credit score — or you may not have any score at all if you’re concerned about opening your first credit card! If either of these situations applies to you, we want to let you in on five of the top myths that may be keeping your credit score low. Read on to learn the quick and simple fixes that you can use today to reverse the effects of these credit score limiters.

1. Credit cards are inherently financially “risky” and shouldn’t be used.

If you opt not to use credit cards, this could put you in a place of financial hardship later. If you’re looking to make larger-scale investments, lenders will want to see a history of credit use and repayment to help them assess the potential “risk” of giving you the loan. Ideally, you’ll want to work toward a debt-free or a debt-reduced lifestyle, but a small to moderate amount of “debt” is necessary in order to show your history and regularity of payment. You can make this necessary evil work for you by using credit cards that offer additional benefits with each expenditure, like cashback cards or travel-specific cards.

There is no way to confidently pass off your credit report and personal information to a repair agency and expect overnight fixes. In fact, there are many more ways that you could be put at a disadvantage. Many credit “repair” companies are scammers in disguise, looking to get as much personal information as possible to do what they want with. You may see these agencies advertising on social media, or message board sites. If you choose to use these types of companies, you should consider doing thorough research and reviewing their rankings on the Better Business Bureau. Legitimate services will work with you to remove inaccuracies that may be listed on your credit report, get your outstanding lender ledger current, and offer you insight and financial strategy to help you move toward a goal of debt reduction.

They will also show you several “green flags” that will prove their legitimacy. When working with a credit repair company, you can expect to not be charged until services are performed. They will also explain to you that you are legally allowed to resolve your credit concerns on your own. If you notice that they are attempting to charge your card upfront when services have not been performed, or are saying that they can “reset” or “clean” your report, it’s best to avoid it altogether. Those are signs of a credit repair scam.

3. Checking your credit score causes it to lower.

This is a common myth, but it is altogether untrue. Professional inquiries submitted to reporting agencies by lenders can cause your score to dip if too many inquiries are submitted in a given time. However, using free tools such as Experian and others to gain insight into your personal credit score will not put you at risk for a lower overall score. In fact, this is very important to do, as you can shift your strategy to meet your financial goals quicker. Your greatest tool in the toolkit for financial success is knowledge, and knowing where your credit health is, is a great way to take steps to true financial freedom.

4. If you can’t make a payment, there aren’t any options available to you.

Unexpected financial hardship happens. Whether you’re dealing with illness, death, loss of a job, or something else, it’s always best to communicate with your lender as soon as you are doubtful that you will make your payment date. Often, you may be eligible for temporarily lower payment rates, or delayed payment altogether until your situation improves.

If you’re facing bankruptcy, you don’t have to struggle alone. The experts at Ascent Law are here to help you to navigate your next steps to financial health. For more information and a free introductory call, please visit our website, or connect with us today at (801) 432-8682.